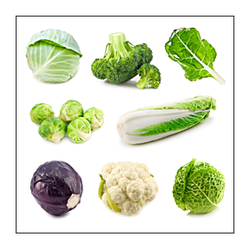 The family was previously known as Cruiferae because it is characterised by flowers with four petals forming a cross.  A great variety of vegetables in this family are ideal for the home gardener having originated from different climates, geographical regions and cultures.

A lot of gardeners don't save seed from members of this family because they aren't sure what will cross with what.  Also saving seed often means we have to sacrifice a bit of food from the table and commit a bit of garden area that could be growing something else.


What will cross with what?

Members of the cabbage family will cross with others of the same species, so we can group them into a number of groups according to species and each will cross with other members in their group but it can be expected that they won't generally cross with ones in another group (different species). We have difficulties getting info on all the brassicaceae family and would welcome input.

The issue is complicated by listings of what I understand to be sub-species in some catalogues and other literature.  The following are thought to be a sub-species with their species following.

Others-  Raphanus raphanistrum- Wild Radish (Ref 9).  Seed to Seed (Ref 1) says radishes (R. sativus) will cross with wild radishes, however if they are different species then I wouldn't necessarily assume this to be so.

The life cycle of a cabbage, for example, is seed germination, growth, flowering and seed set.  Members of this family grown in the vegie garden don't generally flower until they are past their normal usable stage.

So, why shouldn't we just buy or grow our own seedlings, grow them and harvest without letting them go full cycle and buy more seed or seedlings?

If we intend growing them organically then let's give a bit of thought to what happens when we break nature’s cycles.  Some of the natural predators of aphis, thrips and other small sap sucking pests in the garden are the larvae of hover flies and small predatory wasps.  The adult hoverflies and other beneficial insects are attracted to the flowers of many of our garden plants as they eat pollen or nectar. Breaking nature’s cycle deprives them of their food source and veggies in this family are particularly attractive to beneficial insects.

A benefit from plants that don't flower until they are past their useful point, we can, for example, grow cauliflowers, broccoli and cabbages each year and still save our own seed.  One year let your best cabbages go to seed, the next your caulies and the third year let the broccoli go to seed.

Each year save enough seed for at least three years.  So, how about letting your best few broccoli plants go to seed and evolve a more locally adapted strain that suits your situation.  What else can we save seed from at the same time? What will cross with what if you want to save your seed?   Well let's grow some.

Most of them are easily grown organically throughout S.E. Australia once you overcome the "supermarket mentality" that a limited number of veggies should be available 12 months of the year.  We should be growing a greater diversity of veggies with different ones available at different times of the year.

Members of the cabbage family have been grown and developed in a wide range of cultures and seem to have been developed by both consumer and subsistence societies.  Cabbages, cauliflowers, broccoli, Brussels sprouts, radishes, turnips and swedes can be efficiently grown in one area then harvested, transported and sold in another area.  They are suited to our consumer society.

Others like kale, mizuna, mibuna, pak choi, wong bok and the diversity of other Chinese and Japanese salad greens are very suited to a home gardener because of their long harvest period and the ease with which they can be grown.  Perhaps these have been developed by subsistence societies.

Both groups may have their place in any garden, however, the ones in the first group may often be grown when ones in the second group would be better suited to the home garden.

Mizuna-  An easy to grow plant with a very mild flavour that makes it ideally suited to salads and sandwiches.  Except for mid winter they can be planted all year round and you can continually pick the leaves over a long period of time.  Use as a substitute for raw cabbage.

Mibuna-  A salad green that grows very quickly and is good to interplant amongst slower growing veggies.  Plant all year.

Mustard Greens-  A variety of leafy salad plants in the cabbage family fall into this category, they are great in salad, blending well with lettuce.

Some others that are also very easy to grow but prefer more sun- Radishes- Great veggie to start the kids on, anyone can grow them but keep the water up or they will get hot and tough.  Use in salads or soups, try the long white varieties for autumn planting and winter harvest.

Kale-  Try the varieties about, these are hardy and easy to grow, you can continually pick leaves over the season.  Use it as a substitute for cooked cabbage or in coleslaws.  Plant from August till early April.

Kohl Rabi-  Forms a bulb above the ground which can be grated and used in soups or salads.  Young plants have a really good flavour grated and eaten raw.  Plant from August till late Feb.

Turnips and Swedes-  Great for soup in the cooler months and if these are to be harvested in late autumn and winter then they might be best planted from January to early March.  Can be cooked with roasts and other cooked meals.

Cabbages, Cauliflowers, Brussels Sprouts and Broccoli-  These are all what's termed "heavy feeders" and like a compost rich soil and do well if they follow beans or peas in the rotation (but it's not important).

They are attacked by a caterpillar that is the larvae of the Cabbage White Butterfly (which attacks other members of this family) and it provides the greatest challenge to us growing them organically.  If we plant them in the spring the adult butterfly is active throughout the warmer months and a continual pest.  If we plant seed in early February and plant out the seedlings in early March then the butterflies are becoming less active as the season gets cooler.

Late summer, early autumn plantings give a winter harvest when we have the greatest need for cooked veggies like the cabbages, caulies and broccoli.  Seedlings planted after the end of March may not reach a good size before winter and remain stunted.  Of these three, I only choose to plant broccoli because after the main head has been harvested the side shoots can be continually harvested for months to follow.

One way to grow them organically is  under chicken wire or similar cages to keep the adult butterfly off or autumn plantings can be given one spray of Dipel, a spray made from the spores of a bacteria harmless to humans.

Members of the cabbage family like soil varying from slightly acid to moderately alkaline and should be good companions for tomatoes, capsicums, lettuce, beans, peas, onions and garlic.

Some problems and possible solutions- Distorted or malformed leaves of cauliflowers and failure to form a head- probable molybdenum deficiency, Peter Cundall recommends mixing Sodium mollybdate in water and using it on the seed bed.

Stunted plants- soil low in organic matter or nitrogen, too acid or planted too late.  Plants going to seed prematurely-  transplant shock or planted at wrong time of year.  Care must be taken when transplanting any of the members of this family.

Going to save some seed?  Have a go. Only let your best plants go to seed and save seed from at least six plants if you can.  Let the seed pods fully dry out before harvesting, crunch up seed pods (such as stomping on them in a pillow case) and put through a suitable sized sieve.

Ref 2 The Seed Savers Handbook by Michel and Jude Fanton,

Ref 9 Weeds of Forests, Roadsides and Gardens by Friends of Sherbrooke

Non-profit groups such as garden groups, organic groups, permaculture  groups or similar are encouraged to distribute this material by  computer printouts or photo-stating.  Groups are encouraged to make their  own pamphlets to photocopy and sell for profits for their group.