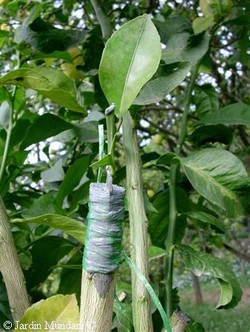 It is important to have the rootstock growing vigorously so a bit of a nitrogen boost from rich compost or one of the pelletized chicken manures (in moderation) is recommended perhaps a month before hand with a lighter boost perhaps a week before grafting.  Keep it well watered during this period.

What can we graft while actively growing? Virtually everything that we normally graft while dormant and a lot more.  So, if you have taken a pilgrimage over Christmas to your great grand parents' home site way out in the backwoods and there an old plum tree near deceased with two delectable fruit on one of the few remaining branches, what do you do?  Take the minimum one or two scions (after sterilizing your secateurs or knife in methylated spirits), put them in an airtight plastic bag with some moisture and keep them cool.  Then as soon as you are home graft them on to a plum rootstock.  Or it might be a lovely apple found growing on the side of the road on a distant journey where you don't want to make a special trip back just to collect scion. 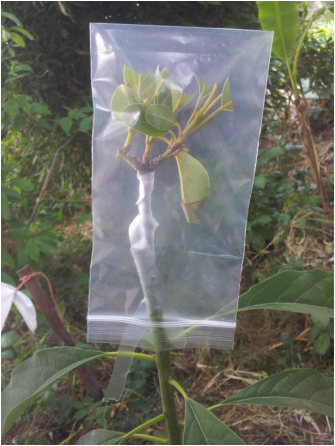 From memory (I should have bought his book!) Allen Gilbert recommended a a normal whip and tongue graft and covering it with little plastic bags like condoms so I refer to them as such.

So, take your bit of plum, apple or whatever home graft it normally and stick a condom over it to be taken after it has shown signs of taking (bonding together), but make sure you don't remove it prior to a heat wave, choose cool weather to remove it. 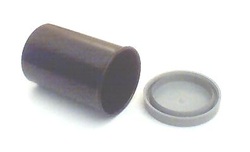 My variations to what Allen recommended is the use of the liquid rooting hormone usually used to strike cuttings, because the callousing it promotes in the cuttings is the same as the callousing involved in healing and bonding of the scion and rootstock.  So I to refer to it as a callousing hormone.  I get one of the small plastic containers 35mm photographic film comes in and put in a couple of drops of callousing hormone, then 3/4 fill it with clean water, shaking it to mix it. 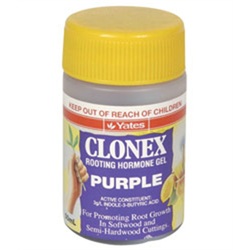 This is not an advertisement! Just use any plant rooting hormone.
Then I do a normal whip and tongue graft but use an eye dropper to drop a couple of drops of the mix on to either the scion or rootstock along the edge where it is intended to align the cambium layers.  Then tape it up as per normal and experiment with Allen's idea of the condoms.

In addition to what we normally graft while dormant have a go at citrus, avocados, sapotes and anything else you would like to try.  If you have success with things not normally grafted then please share your discoveries.

If you are in a gardening, permaculture, organic or similar group then each month bring along a few fruit for people to try as well as a few cuttings of scion wood. If someone likes your peach or apple then they can take home a scion or two and graft it on to one of their trees.
Factsheet from the ABC website:
Grafting Techniques [8/12/2000]
Allen Gilbert is a horticulturalist and gardening writer who lives on lovely Bruny Island, off the south-east coast of Tasmania. His many years of writing and horticultural experimentation have concentrated on the specific requirements of Australian growing conditions.

Allen has found that in Australia trees don't become fully dormant, which means that a tree can take a graft at any time of the year. In this segment he demonstrates some of his grafting techniques. First, he stresses that grafting tools need to be sharp and cleaned with disinfectant to reduce the possible spread of disease.

Bark Graft. The scions (pieces to be grafted) have been stored in the fridge crisper, then soaked in water to rehydrate them. To prepare the scion, make a 30? cut diagonally across the diameter of the lower end, cutting almost through to the bark on the other side. To form a small wedge shape, take off the bottom tip of bark from the opposite side.

As root stock Allen uses a seedling tree with strong, well-established, deep roots. All recent growth is cut back, leaving only main branches. At the end of a sawn limb a vertical cut is made through the bark and vascular cambium (the thin green ring between the bark and wood). The cut's length needs to match that of the scion. Ease open the cut with a screwdriver and insert the previously prepared scion. Do this quickly or air will oxidise the cut and the graft will not join. The open wound has to be covered to exclude water and possible disease. Use grafting tape like a tight bandage over the whole area and seal this with grafting wax.

Allen's secret to grafting success is to use a tube of plastic, like a plastic bag, to cover the scion. The top end is sealed with sticky tape and some water sprayed into the bag before securing it over the scion with a pin stuck into the root-stock plant. It is very important to leave the bottom end open to allow for air circulation to prevent fungus build-up or rotting.

Whip-And-Tongue is one of the easiest grafts. Try to match the diameters of the scion and root stock, as well as the length of cuts. Use a 30? cut on both the scion and the stock material. Make a further cut across the first cuts, to form the tongue. Make this cut halfway along the 30? cut of one piece and one-third of the way along the other. Slot the two pieces together. The joins, if well-cut and matched, should hardly be visible. If using material of different diameter, ensure the two bark layers meet along one side.

Wind grafting tape tightly around the whole graft to cover the wound and exclude air which could prevent the graft's success. Allen uses bubble wrap for this purpose. The air bubbles warm up during the day and retain their warmth at night. This keeps the joint warm and promotes the scarring tissue (callus) on the graft, seen as a fine white line over a graft join. Cover the package with a plastic tube, secure it with a pin and leave it on until leaves or flowers develop.

With the use of plastic bags over the graft to act as mini-greenhouses, Allen has boosted success rates to close to 100 percent.