NASHI PEARS
The following link has some useful info on it - http://www.dpi.nsw.gov.au/agriculture/horticulture/pomes/nashi 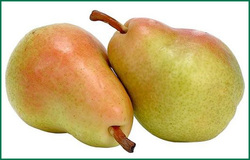 European Pears
The 1875 Frogmore Nursery catalogue said this of pears-

"This delicious fruit is just the tree for this Colony; it revels in   all kinds of soil, surpassing in growth all other kinds planted at the   same time.  There are varieties ripening from 1st of January to  December."

There are a number of references used to make up this list of pear varieties known to have once been grown locally.
1. Goodman’s catalogue, 1906. [Goodmans1906] The catalogue used American spelling for words such as color (colour) and flavor (flavour) and this has been retained.

5. List of fruiting plants growing at the Royal Horticultural Gardens, Richmond Park, Burnley, in 1896.  Thanks to the State Library of Victoria for allowing us to use information contained in this list. [Burnley]

6. List of wax models kept at the Scienceworks Museum. At the Scienceworks Museum, 2 Booker St Spotswood, there are a substantial number of wax models of pears and this may provide an excellent means of identifying many of the un-named varieties that are possibly rare heritage varieties as well as confirming or otherwise the identity of some of the ones that are being re-discovered. The collection can be viewed on weekdays between 10 am and 4:30pm, by previous arrangement on 03 3924819 and ask for Liza Dale.

Varieties of apple that there is a wax replica of have [Sci] beside them.

Bob operates a mail order nursery propagating a number of heritage varieties of pears on quince rootstocks, giving a tree about 1/4 the size of a normal pear tree.  Fruit is of similar size to normal pears and this means of propagating provides very manageable trees.
A specialist in heritage and modern varieties of apple as well as plums and hazelnuts.  Send 3x45c stamps for catalogue.

Group 3 is for Government agencies who may provide propagation material.

The following are given as incompatible with quince and it is suggested that one of the above is used as an intergraft- Bartlett, Bosh, Winter Nelis, Seckel, Easter, Clairgeau, Guyot, Clapps Favorite, Farmingdale and El Dorado.

Hartmann and Kester also say the following on quince rootstocks-  "There are a number of quince cultivars, most of which are easily propagated from hardwood cuttings or layering. 'Angers' quince is commonly used as a pear rootstock because its cuttings root readily, it grows vigorously in the nursery, and does well in the orchard.

The East Malling Research Station has selected several clones of quince suitable as pear rootstocks and designated them 'Quince A', 'B' & 'C'.

'Quince A' (Angers) has proved the most satisfactory stock. Quince B (Common quince) is somewhat dwarfing, whereas Quince C produces very dwarfed trees.  It is important to use only virus-tested stock.

catalogues from the last century-

1. "The American Fruit Culturist" by Thomas (about 1880)-
DWARF PEARS
For orchard culture, and in most parts of the country where the pear flourishes with great vigor and proves highly productive, pear stocks will doubtless always be found preferable to all others.  The advantages of a dwarf growth on dissimilar stocks have already been pointed out under the head of stocks.  Such trees are not so long lived as on pear roots, and they require more thorough and fertile culture, and care in pruning.  But they have some important advantages, such as coming into bearing, occupying a fifth part of the ground, thriving in many soils where pear-stocks will not, and in a few instances improving the quality of the fruit.

The only reliable stock is the French quince.  Nearly all the experiments with mountain ash have sooner or later proved failures.

Budded or grafted on apple seedlings, pears sometimes make a feeble growth for a few years; but unless the grafts themselves throw out shoots, by planting beneath the surface, they sooner or later perish.

It sometimes happens that grafts of a few varieties inserted at standard height, grow and bear for a few years.  The thorn (hawthorn?) has been used in England, and to some extent in this country, with partial success.  But all other kinds of dissimilar stocks have given way to the quince, which is much superior for general use to any other.

The varieties of pear do not grow with equal facility upon the quince. A few, as the Duchess d'Angouleme, Louise Bonne of Jersey, and Beurre Diel, are so much improved in quality that their cultivation on pear stocks is discontinued by most fruit-growers.  A large number flourish well, but are little changed in quality, as White Doyenne, and Dearborn's Seedling.  A few, on the other hand, succeed badly or wholly refuse to grow upon quince stocks, without double working, which consists in first budding some freely growing pear upon the quince bottom, and then budding or grafting the "refractory" sort into the pear shoot.

As a general rule, double worked trees do not flourish for a great length of time.  Single-worked trees have done well for thirty or forty years under favourable influences.

The following list, made out chiefly from the combined experience of European and American cultivators, may prove valuable to those commencing with dwarf pears.

1.  Pears succeeding better on quince than on pear stocks, and which should be mostly worked as dwarfs.

2. Pears usually succeeding well both on pear and quince.

3. Pears growing on quince, but better on pear stocks.

Dwarf Fruit Trees for the Home and Garden, by Harold Tukey lists the following in three groups (only those not listed by Thomas have been listed here)

"The American Fruit Culturist" gives the following varieties as successful on hawthorn-
Beurre Bosc, Flemish Beauty, Marie Louise and some others.

Thomas Lang and Co, Nurserymen of Ballarat and Melbourne list the following pears for sale on quince rootstocks-

The result is not always the same in different soils and in different seasons.  The Seckel, for instance, has wholly failed in one year, and in another, on the same spot of ground has grown well.

The changes wrought by the quince stock are often important and interesting.  T Rivers states that the Beurre d'Aremberg ripens several weeks earlier in winter; that the Easter Beurre is rendered more productive and matures its fruit, while on the pear it is a bad bearer, and does not ripen; that the Fortunee is a "perfect crab" upon a pear, but on the quince is melting and juicy; that the Glou Morceau is imperfect and ripens badly on the pear, but is always fair and attains a high and mature flavour on the quince.  As a general effect the size of the fruit is increased, but in some cases is rendered more gritty in texture.

Pears with a reference in the literature to being compatible with quince rootstocks have (Q) beside them.

Vigor of the variety is expressed as a value from V1-V3.  People multi-grafting trees should try to only have all varieties of the same value on the same tree.

Flowering times are expressed as F1-F5 (t means triploid or male sterile) and there is a desperate need for more information.

U or S refer to the growth habit of the variety, U being upright and S being spreading.  Best results with multi-grafting may be best achieved 1`if all varieties were either U or S.  Upright varieties are suited to espaliering and spreading varieties may not be.


Thanks to Adrian and Rosalie Taylor of Valley Trees Nursery for their assistance in compiling the ripening times chart.

Non-profit groups such as garden groups, organic groups, permaculture groups or similar are encouraged to distribute this material by computer printouts or photostatting.  Groups are encouraged to make their own pamphlets to photocopy and sell for profits for their group.