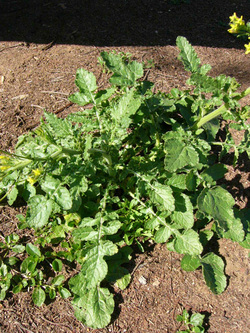 Do you know of any useful plants that can be used as weed barriers in the garden and orchard and how are they best used?  Plants that suppress weed invasion and have other uses would have a place in a lot of designs.

I'm sure most have heard of comfrey being used as a barrier against couch, kikuyu and other weeds.  I've heard various reports but have limited experience with its use.  Frances Lang of Green Harvest, Crystal Waters recommends planting the comfrey plants at a spacing of .5m in rows at least 3 rows with the plants diagonally opposite, .5 metre apart.

The comfrey doesn't self seed and shouldn't be invasive if the plants are not damaged.  Comfrey likes fertile soil and to grow vigorously enough to suppress weeds needs some summer watering. Comfrey can be grown from root cuttings, it is deep rooted, so a good nutrient cycler and an excellent companion to most fruit trees.  To top it all of it is good forage for animals, ducks and geese and can provide excellent mulch.

Frances also recommends Arrowroot (Canna edulis) as a weed barrier. According to notes provided by Isabell Shipard, the leaves of arrowroot are a high protein fodder eaten by goats, cows, donkeys and geese, my experience has been that Muscovy ducks and chooks both like it also. Arrowroot grows up to 2.5m tall and is an excellent wind break.  The young tubers can be baked or grated and used in soups or baked.

Lemon grass can form an equally effective weed barrier, does better in poorer soil and is more drought hardy than comfrey.  Though moderately frost tender, it is growing in at least one location in Gippsland that receives heavy frosts, simply going dormant in winter.  Lemon grass has a number of herbal and cooking uses, and can be propagated by division.

Pepinos seem to be excellent at suppressing many weeds.  I have used them sucessfully when couch was growing where posts had made holes in weed mat. The pepinos stopped the couch where it had previously been coming through.

Weed growth seems to be considerably reduced under Jerusalem Artichokes and Yacons, the weeds that do grow often noticeably lack vigor.  I don't know their value as a barrier, however it is likely that they could be grown with less weed management than most crops.  How about sharing your observations through the newsletter.

Non-profit groups such as garden groups, organic groups, permaculture groups or similar are encouraged to distribute this material by computer printouts or photostatting.  Groups are encouraged to make their own pamphlets to photocopy and sell for profits for their group. It is asked that anyone intending to use this information in commercially published form ask the permission of Neil Barraclough RMB 1477 Stratford 3862 0429 888 706 email neilbarra@yahoo.com Mob. 0429 888 706