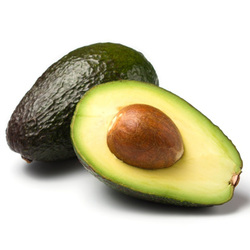 By Neil Barraclough (who has never even grown an Avocado tree).

Up till relatively recently avocados generally weren't considered something to be grown easily in Melbourne and their culture not well understood.  We would particularly like to thank Maurie Branton for allowing us to draw some information from his book- "Growing Avocados in Melbourne and similar temperate areas."  Unfortunately the book is now out of print.  Some of the maturity information has been taken from this book and Maurie tells us it is changing with time, tending to get later.

Avocados come from a fair climate range, native to subtropical Central American rainforests.  Though native to warmer areas than Melbourne and similar parts of S.E. Australia, with care for the first couple of years they go on to be very productive trees.

Avocado flowers have separate male and female parts, in the warmer areas these parts open separately, necessitating a number of trees for pollination.  In cooler areas the flowers male and female parts can be open at the same time meaning one tree can be sufficient.  Possibly because commercial production is mainly based in warmer areas avocados have been grouped into A and B types, an A type has maximum female flowers open when a B type has maximum male flowers open and vice versa. If you intended planting two then it may be worth selecting an A type and a B type.

Avocados can grow to very big trees in their natural environment, however in cooler areas, though varying with variety, they don't grow as big.

Additional information in their catalogue on avocados and other fruit.

listed, give them a ring.

Good cold tolerance and productive in Melb with an upright growth habit. Smooth oval fruit maturing in July and keeping on the tree until November.  {Sunraysia}  {Gilberts}

Good cold tolerance and can grow into a very large tree, we would like more info on it in S.E. Aust.  {Sunraysia}  {Huonbrook} {Gilberts}

It is asked that anyone intending to use this information in commercially published form ask the permission of Neil Barraclough RMB 1477, Stratford. 3862 email neilbarra@yahoo.com Mob. 0429 888 706